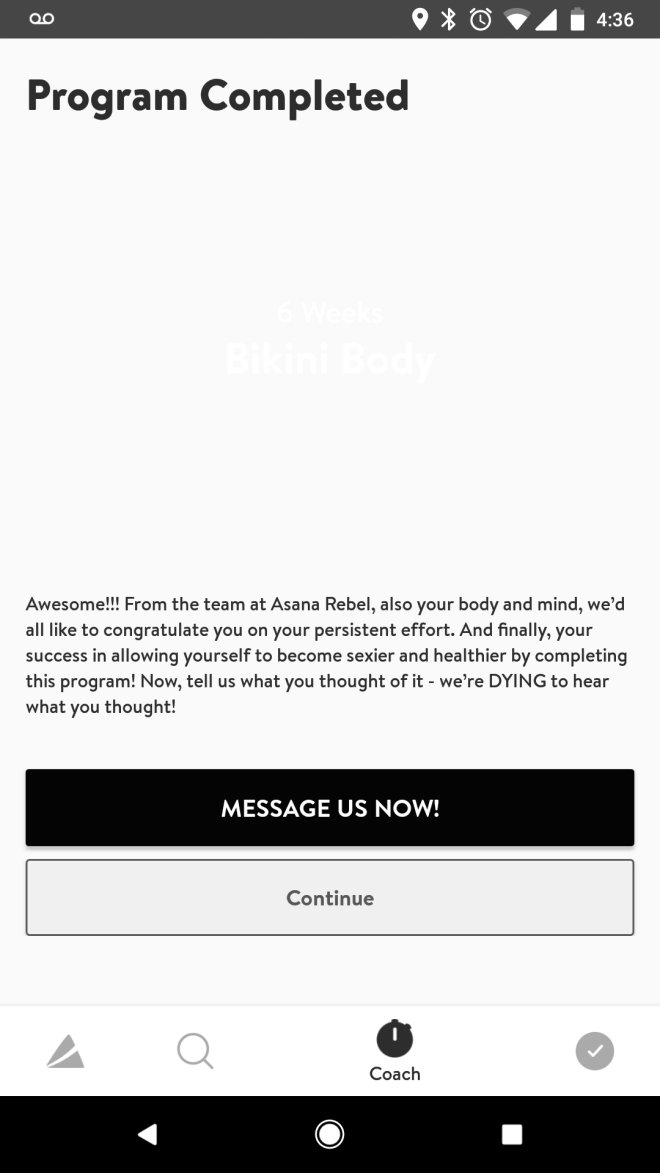 Back in November is when I really started noticing it. I had passed my one year anniversary of transitioning from a fast paced, on my feet position doing merchandising and stock for a busy retail store, back to office life. My wardrobe wasn’t tight, I kept telling myself, I just wasn’t comfortable in them anymore. Maybe I just needed new things. Shoes that I’ve had for years just weren’t right anymore. And suddenly, I noticed that even my ring just wasn’t sitting on my hand comfortably anymore.

I started doing yoga a few times a week. I’m busy, I’m stressed, and hell yes half an hour a day is too much to commit on a regular basis to physical activity. I have a Misfit step counter, and while I don’t hit 10k steps a day often, I always hit at least 6k, so what’s the big deal? Knowing that I wasn’t going to up my physical game, I made a mental commitment to pay attention to what I ate, but realistically, I ate well. January of 2017 I committed to cutting down refined sugars, and ‘junk food’, and anything heavily preserved, and I had committed hard. The food I ate was nutritious and nourishing and well balanced, so I kept giving myself a pat on the back.

In January of this year, the first of the month, I started calorie counting. I wasn’t expecting to see progress of casual yoga in a few months, but I wanted to see if I could pin point food behaviour trends. I found a few, started making some changes, but I still wasn’t mentally satisfied with what I was doing.

Finally frustrated enough, and unsure what I could do to make and motivate progress, I bought a scale. I knew I was a little fluffy around the edges, and that I had let my muscle and tone melt away, but how bad could it be? When I was going to the gym regularly, I kept a solid weight between 132-138lbs, a healthy, strong and muscled weight for my height. In my mind I was pretending I was 140, that there was no way I could be much more than that.

On January 17th, I stepped onto my brand new scale, and my life changed. I was 148.8lbs. I stepped off the scale. Stepped back on it. The number didn’t change. I took out the batteries, and blew on them. Tried again. I was naked and just shy of 150lbs, the heaviest I have ever been in my entire life.

I’m sure some of you are thinking how that isn’t such a big deal, that isn’t a big number. That if I was comfortable seeing 138lbs, ten pounds more isn’t so bad. I am five foot four, with what is considered a ‘small frame’. Outdated BMI charts have that weight teetering on obese. Even updated ‘Smart BMI’ says that weight is just a titch too much. I was in the 130’s when I was weight lifting. When I just did yoga and cardio, I was around 125lbs. When my shock subsided, I knew I needed to make a change, immediately.

That’s where Asana Rebel comes in.

The app had been advertised to me, via targeted ads on Instagram. I had looked into it a few times, I had downloaded it but never done any of the workouts. It had a few free to use routines, but for a monthly, yearly or one time fee, you could unlock the rest of the routines, as well as a set of programs, varying from 4 – 8 weeks, with a variety of fitness targets, like fat burning, balance or relaxation. On January 17th, I signed up for the Fat Burn I program(I know the photo above says I completed the Bikini Body, I think the app glitched out as I kept swapping it between phones when mine died). Last week, I finished it.

Asana Rebel is not your mom’s yoga. The routines and daily recommended flow exercises are simple, and like the programs, have a variety of targets, and vary in length, between 6 – 25 mins. Longer routines (15+ minutes) have a short warm up and cool down, which I appreciate. The programs on the other hand, are nothing short of a challenge. They vary between 24 – 30 mins, and include a dedicated warm up and cool down, with a savasana at the end. The program is a vinyasa styled yoga, so you spend from the start of the routine to the start of savasana moving.

It has been a hell of an eight weeks, doing this program daily. I usually start sweating before the warm up ends. I huffed and puffed, and pulled ham strings over extending in frustration at not being strong enough, flexible enough, especially in the first week. I have lost more of my eyelash extensions to my yoga mat than I’m comfortable admitting. Yet, I survived it.

In eight weeks, dedicating to working out seven days a week, I only missed two work outs. I lost eight pounds, putting my ‘smart BMI’ in the high end of normal, but normal nonetheless. I am back to doing yoga everyday, and most days, I do it twice a day. It turns out, in the evening alone, I have approximately 45 minutes to dedicate to my physical health. Couple that with a morning routine, and there are days that I do an hour and a half of just yoga. I can’t decide how ‘different’ I really feel, but I know I’m stronger.

At the end of the program routines, the sweet voice leading you says, “Today’s workout was a challenge, but you did it. Keep coming back, because the more you practice, the easier it will get.” I never felt like the program got easier, but the routines in the app that I did to supplement and compliment have gotten easier, and more fun. I’m taking this week off from a program, and starting a new one again Sunday. I still have work to do, but I’m happy to take it easy, and take it slow to get myself back to where I want to be, and yoga is just something that makes me, and my body happy.