The Mystery of The Cortez

The holidays are usually pretty stressful for me, because I have a lot of difficulty subscribing to the materialism of the season. I personally don’t like gifts, or surprises, and it stresses me out almost to the point of illness going out and buying gifts for people, especially when I know that there will be gifts waiting for me as well. This year was particularly difficult, as I was spending my first Christmas with a new second family, as well as significantly more time with my own, and I was upset with the meager budget my Toronto life left me.  So, I did what I felt was the next best thing – and I baked.

Now, when I say I baked, what I actually mean is I spent hours pouring over Pinterest and Instagram, looking at tasty things, decorated in cute little Christmas shapes with a bottle of wine. The bright eyed man both encouraged, and kept pouring until we had decided on what delectables we would make and give away. We were mostly successful. We made homemade gingerbread house kits, with extra ginger snaps for the parties we attended, and hazelnut doughnuts. We made an amazing tray of hazelnut nanaimo bars as well, which we conveniently kept forgetting at the apartment, leaving it to us to finish.

In my journey across the internet finding delicious things to make, I stumbled across a cocktail called The Cortez. At first, I was only attracted to the beauty of it. It was pink and creamy, with chocolate and cranberries floating in the bowl. Upon following the rabbit hole link, I discovered it was a gin drink, mixed with cranberry and milk, and both of us decided that this was now our New Years plan.

The directions were simple enough, how could it go wrong? I made the homemade chocolate syrup, and let it cool, then put all the measured ingredients in the blender and poured like directed. Let me tell you, this was not the drink we were dreaming of.

First, I’d like to say, my blender did not like the ice. It tried to chop it, but it just wasn’t happening. We used pomegranate Brookside candies instead of cranberries, so no cute little floating crans, but that wasn’t even of the worst of it. As the photo tells, the colour was COMPLETELY wrong. All I can think is that maybe the chocolate sauce was garnish, but it wasn’t in the garnish list, it was part of the ingredient list. I was disappointed at the colour, but it was all good flavours, and a healthy amount of gin, so I stayed hopeful for my first sip. 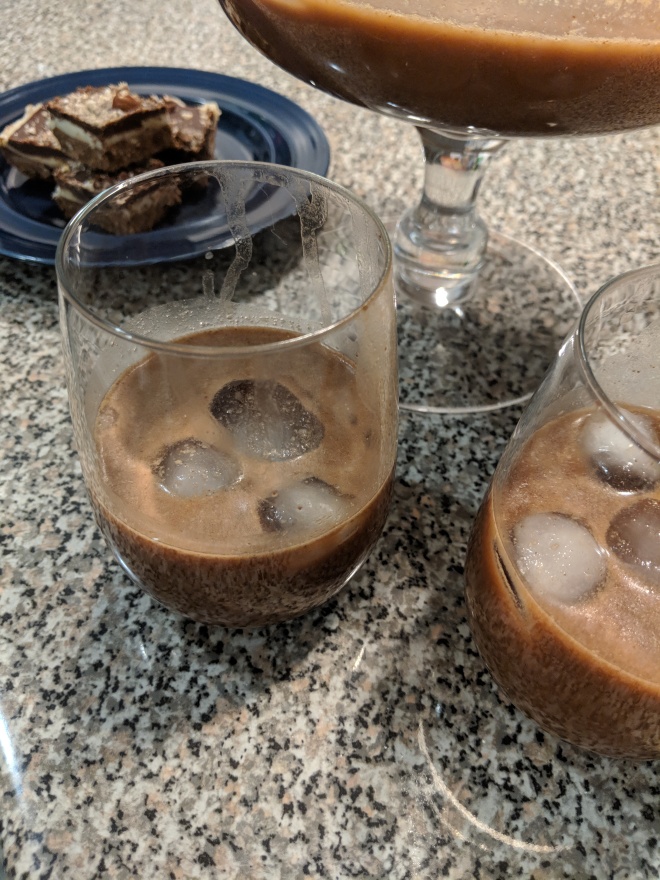 Again, we were absolutely let down. I tried to blame the thinness of the drink, and the strangeness of it all on the fact that we used almond milk instead of regular milk, but when really reflecting on the ingredients, there is no way that’s what was wrong here. Even the possible accidental addition of chocolate syrup wasn’t the problem. The whole thing just seemed strange, and not at all what we were expecting.

As mentioned though, it did have a healthy addition of gin, so let me tell you, that bowl was empty real fast.

The real shining star of this whole endeavour, was my nanaimo bars.

Not only are they beautiful, but they were absolutely to die for, and so easy to make. The hardest part of the whole process is letting each section chill while you build the layers. We were baking other things while making these, so letting them sit in the fridge wasn’t as issue, but they definitely needed the cooling time. This was my first nanaimo bar attempt, ever, so I was pretty pleased with how they turned out.

The Cortez though? It’ll be a mystery to me to what I did wrong until the end of days.

If you would like to try either recipe for yourself, you can find the recipe for The Cortez here, and the Hazelnut Nanaimo Bars here.

Please, please, PLEASE someone out there try to make the Cortez, and tell me where I went wrong!