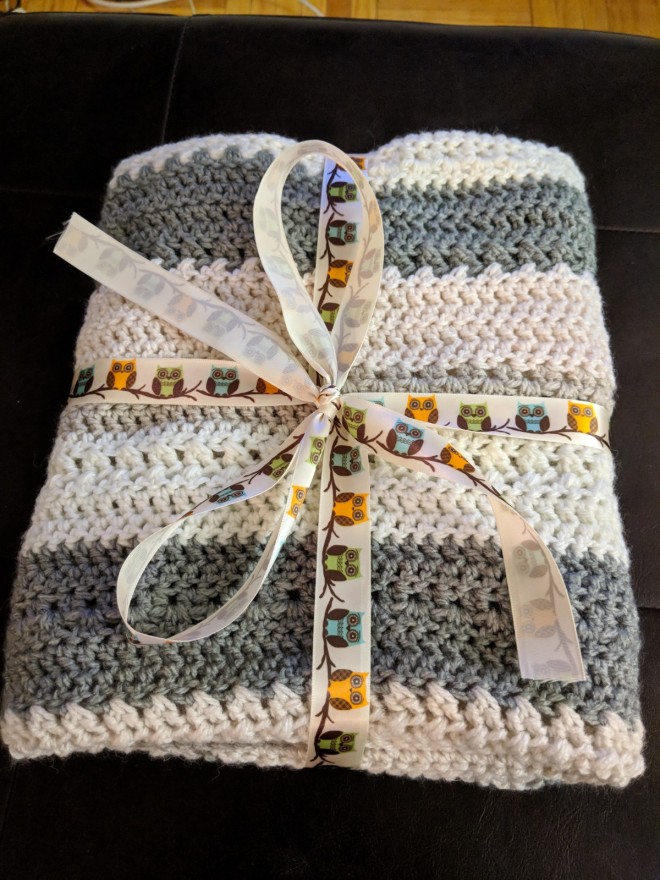 I wrote about this blanket pattern a while back, in fact it was one of my three posts while we were temporarily hosted on SquareSpace. This particular pattern I’ve used a few times now, both for personal and to gift for other people. It’s absolutely stunning, and does up really nicely in either gradients, or in solid colours. The only personal photos I have of the blanket are with Caron Cakes.

I initially found this pattern while hunting for patterns to use Caron Cakes, as I joined the cake trend pretty late. This pattern is courtesy of Olive and Brook, and can be found here, River Rock Blanket. This was one of the contenders for baby G, as it displayed the Strawberry Trifle in such a beautiful way, until I found the Spring Fields blanket. However, this pattern remained in my queue waiting for the right moment, and boy, was I happy that I had it!

The adventure with this blanket starts June of 2018, when my boss’ daughter gave birth to her second little one. We were just about to finalize the opening of our New York Studio for the first of July, and with that, comes a lot of paper work. I started, and worked on the blanket to the best of my ability, but the days seemed to just run away with me. Before I knew it, it was almost the end of September, but, the blanket just needed a border, and Thanksgiving was right around the corner. I, quite thankfully, was able to complete the blanket in time for my boss to give it to her for Thanksgiving. I was incredibly pleased with the results!

Phases two of this blanket started in December of 2018, and finally ended nearly a year after it began. After a long-term breakup, I decided that the granny square afghan I had made years before needed to be retired. I spent a lot of timing searching through patterns to find something I loved, but kept coming back to the River Rock blanket. When done as a baby blanket, it was so beautiful, and textured, but thick and cozy, I couldn’t help but revisit it for myself. I let my new beau pick out the colours for the blanket, more Caron Cakes, Jordan Almond and Blueberry Scone (which unfortunately is no longer available!).

It took ten months, and just over thirteen balls of Caron BIG Cakes no less, but the blanket is complete! I didn’t know exactly how long it would take me to finish such a huge project, but I’m not surprised. I will say that in ten months, I’ve also finished quite a few smaller crochet projects (another baby blanket, and a few other odds and ends), as well as I started candle making, which took up a lot of time over the winter and spring. I don’t have a lot of spare hours to dedicate to crochet, which does make larger projects like this one see a little daunting.

I will say though, I’m so pleased that this blanket is finally complete. It’s a perfect fit for a queen sized bed, and it’s so heavy, I almost couldn’t wait for winter for it to be needed. We were gifted a beautiful sheet set last Christmas that we’ve been saving as well that matches the Jordan Almond palette perfectly, so we had looked forward to the weather turning a little more last fall, so we could make up the bed with the new sheets and the new afghan. We also recently bought a new mattress and a very modern frame that ended up just tying the whole look together. Unfortunately, I’m still a terrible photographer, so a few snaps of the blankets and their progress here and there is the best you’ll get from me!

Since we’re all in self isolation, I’ve obviously got a project (or two!) on the go. I thankfully picked up the yarn for a friend’s baby blanket before we needed to be isolating, I just hadn’t found the time to start (which, I really need to get moving, she’s due in two months!). I’ve also got a few stash buster patterns in the queue for when that’s complete, so I’ll have a few more things to write about as the quarantine continues.

Anyone out there have any great projects they’re working on? Patterns they’d like to share? I’m always up for something new and fun to work on!